Have you ever wanted to go inside the ropes during a PGA Tour event and walk alongside the players as they compete for a championship? At this year’s RBC Heritage Tournament, twenty-two IJGA students got to do just that. The students had the honor of representing IJGA at the event acting as standard bearers throughout the tournament. This year they had the additional honor of participating in the opening ceremony parade, with IJGA senior Arjun Puri leading the way, serving as the standard bearer for parade chairman Courtland Babcock II.

In its forty-nine year history, the RBC Heritage has grown in stature, is widely considered one of the premier stops on the PGA Tour and the Harbour Town Golf Links one of the loveliest. Its unique landscape and narrow fairways represent a challenge like no other on the Tour. With a $6.5 million purse and a total attendance of more than 130,000, the Heritage represents the dream to which many IJGA students aspire.

A standard bearer is essentially a walking scoreboard, showing the gallery who is playing in their assigned player group and displaying their current scores relative to par. As each player finishes a hole, a walking scorer instructs the standard bearer to update the board, if necessary. The bearer then rustles through the oversized pockets of their apron finding the proper numerals and slides them into position beside the player’s name. This seemingly simple task can be challenging at times if conditions are windy or wet, with the standard behaving like a sail on a sailboat when a gust blows through. Being surrounded by twenty-five to thirty thousand golf fans can be a bit unnerving as well.

And though the standard weighs less than 10 pounds, it’s a job that requires physical endurance. A tournament volunteer’s day begins before sunrise as they arrive early to receive their player assignments and organize their gear. Once play begins, they must wait patiently until their group is ready to take the course. From the time their players tee off until they complete the final hole can be four to five hours of walking in the warm early spring sun, updating their boards quickly between holes. “It’s lighter than it looks, but it definitely gets heavier as the day goes on,” said IJGA senior, Sera Tadokoro.

But a little bit of discomfort can yield a lifetime of memories and great opportunities for learning. Getting to walk with some of the PGA’s best as well as those on the rise is an exciting experience for junior golfers, but it also serves as a living classroom on the workings of high-level competition and how players deal with its many facets. “I learned a lot from this tournament,” said IJGA senior Kayla Kozak. “It was surprising to see how much they actually make mistakes. They are not perfect by any means. I also noticed their emotions on the golf course. Very few players react at all except to acknowledge applause. Moving forward I am going to apply some of the things I learned to my own game.”

At the end of a day’s round, the players customarily thank the standard bearers, pose for photographs and autograph a special golf ball or two for them. IJGA students say that almost every player is quite friendly and courteous up and down the course, though their mood can intensify when the situation calls for it. For their part they drink it all in and hope to some day be the one signing autographs for aspiring young golfers lucky enough to be where they are now. “How neat would it be to remember volunteering and playing that course as a junior and then coming back as a pro?”

The International Junior Golf Academy is proud to be a part of the RBC Heritage once again as an Expo Sponsor and volunteer organizer. Click here >> to request more information about our world-class programs for aspiring junior golfers. 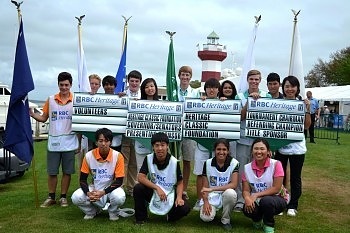 RBC Heritage: Up close and personal with the pros

April 21, 2015
International Junior Golf Academy
Uncategorized
The calm after the storm. The clocks have reset and we now see more than 350 days before the next RBC Heritage. As we navigate the emotions we feel after…
Read More

RBC Heritage kicked off with the help of IJGA students

April 14, 2014
International Junior Golf Academy
IJGA Information, Student Life
What started as a small Thanksgiving tournament in a quiet town is now one of the most anticipated events of the year for Hilton Head, S.C. The annual RBC Heritage…
Read More 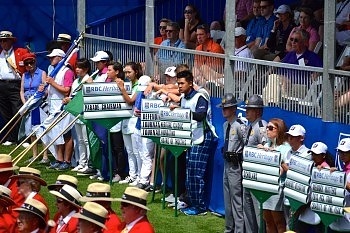