Although a talented golfer–he played on the men’s golf team at the University of South Carolina-Beaufort after graduating from the International Junior Golf Academy–IJGA alum Luke Kerr-Dineen decided to forgo his dreams of becoming a pro golfer to follow a different passion: writing. Now a Senior Social News Editor at USA Today, Kerr-Dineen gets to rub elbows with some of the best golfers of our time. Read our interview to learn about his successful journey from golfer to golf writer.

IJGA: When did you start playing golf?
I think I was like 11 when I started playing golf—I came to it pretty late. It was that Sergio Garcia shot that did it for me. Remember that PGA where he hit it off the tree—it was like the ’99 PGA. I was watching this highlight reel and Sergio Garcia was on the 18th hole and he hit this 7-iron off a tree and I just thought it was the coolest thing so I immediately started playing golf and putting in a bunch of hours. So yeah I think I was 10 or 11 at the time.

How did you end up at IJGA?

My family used to come to Hilton Head for vacation and started just getting to know the island a little bit. IJGA was featured pretty prominently and we’d see all these junior golfers around all playing really well at the time. My mom was planning on moving us back to America and back to Hilton Head and at that point it was kind of just a natural fit because I was really into golf at the time.

What are some of your favorite memories from your time at IJGA?

I used to love traveling around to tournaments. It was one of these things where—you get it a bit in college golf—but in high school it’s kind of like a dream because you get to hang out with all your friends, you get to practice with all your friends and then you get to go and take these road trips essentially to all these tournaments in all these beautiful locations. So that was probably my favorite thing especially toward the end of the season when the weather was starting to get nice—because there was always that sort of bit in January where it’s really cold and you have to kind of slog through it a bit. But once the Tournament of Champions rolled around and the sun pops out a little more and you were taking these big road trips, taking a coach down to Florida to play golf. That was always my favorite and it’s definitely the thing I think about the most.

Did you play college golf?

Yes, at the University of South Carolina-Beaufort. I took a gap year after graduating from IJGA and then I went to USCB and I enrolled in what would have been 2008. And I graduated from there in 2012. Played four years of college golf at USCB.

What advice do you have for current IJGA students who want to play college golf?

I would say listen to your coaches but don’t get too bogged down in the swing. It’s important to make sure your swing is in good shape, but really focus on putting a score together. I remember when I was at IJGA the best kids were the ones who could find a balance of taking on board what their coaches would say but then also applying it to the course. The kids who didn’t fare as well tended to be range rats—their coach would tell them to go play and they’d say no, I’m just going to stay on the range. Listen to your coach when he tells you to go play. And that will definitely benefit you in the long run. Learning how to put together a score, learning how to control your ball around the golf course. And coaches don’t tell you to not go play. They will tell you to go play. Don’t become a range rat and ignore your coach’s advice.

Do you feel like IJGA influenced your career path?

I always think that—with IJGA there were very clear lines that our coaches drew for us. They said if you want to be good and you want to be better and you want to improve, you need to be disciplined and you need to put in hard work and you need to understand how success works—it doesn’t just drop on your plate, you have to really work for it. And they kind of instilled this stuff in us as we’re preparing for tournaments and as we’re competing but then you get out into the real world and the lessons stay with you. You’re not expecting things to fall on your plate; you’re looking for opportunities, you’re working hard toward them, you’re trying to make things happen and that was all IJGA. That was all stuff I learned at IJGA. I actually met somebody once who said I love hiring people who played competitive athletics when they were young because they all exhibit those same qualities. If something gets difficult, they know how to overcome difficulties, they know what it takes to be successful, they know you have to work hard to get it, they have to be disciplined. And I think those are skills that all bosses look for, that all companies look for.

Can you give me a cliff notes version of your career thus far?

I graduated from IJGA in 2007 and then I took a gap year where I just traveled around playing golf. And then at USCB I was the student body president my junior year. I was on the student newspaper. And then I had internships at USA Today and then at Newsweek. I went to Columbia graduate school after college. And then after graduating from graduate school I spent two years at Golf Digest where I was an assistant editor. And then about a year ago I moved back to USA Today where I’m a senior editor. I’m really enjoying it so far.

What advice do you have for current IJGA students interested in journalism?

If they’re interested in journalism, I would say if you’re at IJGA golf is your best asset right now. If you’re interested in pursuing journalism, you’re surrounded by all this talent. You’re in one of the most golf-strong areas on the planet, you’re surrounded by all these top-notch coaches. You’re surrounded by competitive players. You may be competing in these tournaments, but also think about what it would be like to cover these tournaments. Think about what it would be like to interview some of the winners. Try to pursue stories on your own and maybe incorporate that into whatever things you have going on in high school. Maybe you can keep a blog as an extracurricular or something. Sorry this is a long answer, but I would say don’t just focus on playing golf. Focus on the tournament, what’s going on in the tournament. Did someone just shoot 67 and fly up the leaderboard? That’s a really interesting story, go talk to that person and find out what happened. Take a broader view about where you are. Talk to a coach who has really helped some kid improve in the space of a year. What are they working on? Go write about that. Keep an eye on stories like that.

What are your favorite and least favorite parts of your current job?

My favorite part is being able to cover fun, live events. I’m going to the U.S. Open and the PGA and the Ryder Cup this year, which will be really exciting. I’ve been to the British Open when Rory won so being able to talk to all these top class players both inside of golf and outside of golf but specifically golf it’s so much fun being at a tournament and being able to talk to Jason Day after he won the PGA last year. So that’s probably my favorite part of my job. My least favorite part of my job is probably—it’s a good problem to have—but when there’s breaking news happening and there’s a lot of pressure and you need to get something out quickly and accurately it’s a fun stress, but it’s definitely stress that you have to deal with. So, like I said it’s a good problem to have but it’s something you have to get used to.

What do you do for fun?

I play golf. I live up in New York so I manage to play golf once or twice a week during the good season. And then outside of that I go to movies, still hang out with some friends. I cross paths with some friends from IJGA on occasion so I hang out with them. I generally keep it pretty low key. Golf and movies are the two big ones.

To read some of Kerr-Dineen’s articles for USA Today, click here. 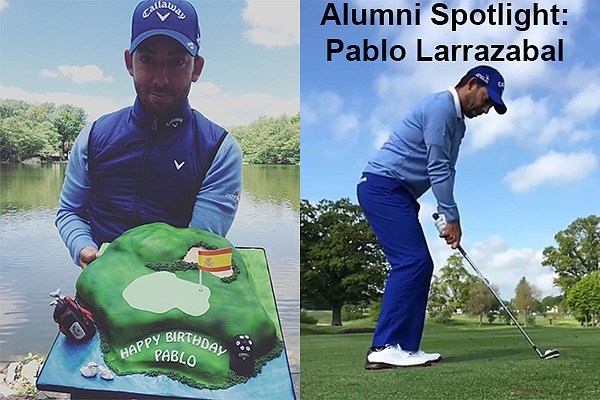 May 18, 2016
International Junior Golf Academy
Alumni News
Although he has four wins on the European Tour, Pablo Larrazabal may be best known for the time he was attacked by hornets during the 2014 Maybank Malaysian Open. After receiving…
Read More
Menu